Hands off our Hospital! 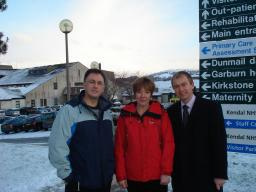 South Lakes MP Tim Farron has launched his 'biggest ever campaign' calling for health bosses to 'keep their hands off our hospital'.

Two whistle-blowers believe that health bosses are looking at looking at 'gifting' the Westmorland General Hospital (WGH) to a social enterprise. The whistle-blowers said that they believe: "social enterprise is a euphemism for private companies like Circle who already run one NHS hospital in Hinchingbroke [in Cambridge]. This is not a recipe for collaboration and integration or development of services and has not been successful in Hinchingbroke."

Currently health bosses are conducting a 12 month review of NHS services throughout Morecambe Bay. The news that there is an option that Westmorland General could be parcelled off is something Tim said he will 'totally and utterly oppose'.

Tim said: "It is unthinkable that our hospital trust should do anything rather than grow our hospital. I am launching the biggest campaign I have ever run to safeguard our hospital. I will not accept local people being put at risk in this way.

"Barrow and Lancaster hospitals have been given assurances about their long term future, but not Kendal. I want the trust to now give those assurances to Kendal too. I will fight tooth and nail to protect our hospital."

We the undersigned call on the University Hospitals of Morecambe Bay NHS Trust to safeguard the future of Westmorland General Hospital. We specifically oppose plans to gift or transfer the hospital site to a third party or social enterprise.

Published and promoted by P Trollope on behalf of T Farron and the Liberal Democrats, all at Yard 2, Stricklandgate, Kendal