Save our rivers: stop polluting them with raw sewage 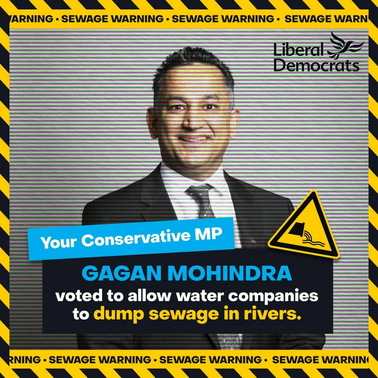 Water companies dumped raw sewage into the River Chess for over 3,000 hours in 2020. Nationally, sewage was dumped into rivers for 3million hours!

The Conservatives and local Conservative MPs Gagan Mohindra and Dean Russell are letting them get away with it and want taxpayers to pay to fix the problem.

Newly elected Liberal Democrat MP for neighbouring Chesham & Amersham, Sarah Green, also voted to ban it. Since being elected she has been working hard with community groups to force the Government to change, joining forces with Lib Dem-run Three Rivers Council.

If local Liberal Democrat MPs and Councillors can challenge the Government, why can't the Conservative ones? Enough is enough, Conservative MPs need to do more!.

It's time for a 16% sewage tax on water companies £2.2bn annual profits to fix them problem and protect our rivers.

Stop sewage dumping. Sign our petition to clean up our rivers.