Bring Back Our Bins 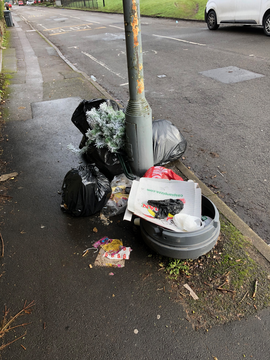 Please sign this petition calling on the Council to bring back the litter bins they have recently removed from the streets of Acocks Green. Our Labour run Council, has recently taken out several bins from our streets, arguing that this was necessary to reduce fly-tipping, which they say the litter bins encouraged. We disagree. Fly-tipping is not caused by litter bins and their removal doesn't stop it. The attached photo was taken at the former location of a litter bin in Acocks Green. As it shows fly-tipping has continued there following its removal. What is clear is that when the bins were removed, littering increased making our streets even dirtier:

"We the undersigned, request the Council re-instates the litter bins recently removed from the streets of Acocks Green. We do not agree with the Council that litter bins encourage more fly-tipping - indeed their removal has been followed by rising levels of fly-tipping in our streets, some of it at the location of the old bins. What is clear is when the bins are removed, littering increases and so we want them returned."

Published and promoted by Thomas Lister on behalf of Birmingham Liberal Democrats all at 78 Alcester Road, Birmingham, B13 8BB.