McCarthy & Stone have closed the Alleyway from Castle Street to Endless Street, Salisbury. We, the undersigned, call on them to re-open The Alleyway to the public.

Paul Sample writes: "For some time now I've been campaigning - with local residents - to get McCarthy & Stone to re-open the pavements on Castle Street and Endless Street. Eventually they conceded.

Alongside this, we've been trying to get them to re-open the pathway that runs alongside the development.

McCarthy & Stone claim "the link between Endless Street and Castle Street is within McCarthy & Stone land and there is no intention to re-open it to the public. It is not a public right of way but was an access route allowed by Aviva and managed by their own security at the time that they owned the land.

"The link has been out of bounds since we started demolition in 2018 and will remain as such." 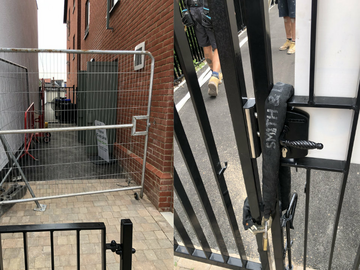 However, I have consulted the Chairman of the St Edmund's Community Association Mr Kenneth Edwards. He has been a Mayor of the City, Chairman of Salisbury District Council and has held many offices in local organisations. He has lived in Salisbury all of his life. He lives about 50 yards from the alley. He negotiated public use of the alleyway with the then site owners (UK Provident) in the 1970s.

Mr Edwards tells me that the original pathway was on the Northern side of the site. When UK Provident wanted to re-develop the land Mr Edwards - then the local Councillor - negotiated with the site owners to move the alleyway to the South side of the site. That means the current alleyway has been used as a public pathway for at least 50 years - and before that an established pathway had existed to the North of the site.

Local residents believe that the pathway should be re-opened on the same basis as had previously been enjoyed by pedestrians and cyclists.