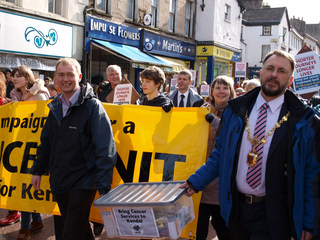 In 2015, Tim persuaded the then Liberal Democrat Treasury Minister to give the area the £12million it needed to open a new radiotherapy unit, but just months later the incoming Conservative government cancelled that promise to local people.

Tim said: "Thousands of you joined me in 2009 when we launched our campaign for cancer treatment here in the South Lakes. Back then, patients had to travel many miles for both chemotherapy and radiotherapy.

"Thanks to your support, the chemotherapy ward at Westmorland General opened in 2011 and since then, hundreds of local people have benefited from treatment right here in the South Lakes.

"We have continued to campaign for radiotherapy in the South Lakes, and that fight goes on.

"It is frankly cruel to force people who are already very poorly to make a 2 or 3-hour round trip every day, for weeks, in order to receive life-saving care.

"It is for those people that I am determined to fight and win our campaign to bring radiotherapy to Westmorland General Hospital."

We, the undersigned, support the campaign to bring a radiotherapy unit to Westmorland General Hospital. We call upon the current NHS England review into services in Lancashire and South Cumbria to include proposals for the new unit.

Published and promoted by P Trollope on behalf of T Farron and the Liberal Democrats, all at Yard 2, Stricklandgate, Kendal