Teignmouth residents are furious at broken promises from the NHS to keep the wards at Teignmouth Hospital open. 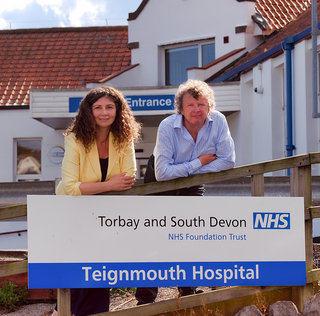 Just over a year ago the NHS said that, while it would move acute beds to Dawlish and close Teignmouth's Minor Injury Unit, the future of the ward was secure and it would remain open for recuperation. But the ward has not reopened and local doctors are concerned that it will remain closed.

FormerTeignbridge MP Richard Younger-Ross has asked the Secretary of State for Health (Conservative Minister Jeremy Hunt) to explain why local residents have been misled on the future of the ward.

"This is what we feared would happen, that the ward would close and not reopen. I am working with other local Councillors and health workers to put pressure on the NHS to honour its promise and reopen the ward."

Working with Richard are Cllrs Alison Eden and David Cox. Alison added, "This is a disgrace, our Hospital is being closed bit by bit. This is not what was promised. We must fight together to save Teignmouth's local Hospital."

Cllrs Alison Eden and Richard Younger-Ross, campaigning to save the wards at Teignmouth Hospital, PLEASE SIGN their petition.