Save Windsor Fire Station: Six On Board

Since the proper Fire Station at St Mark's Road closed, Windsor's Fire Engine (now based in Slough) has been deployed with just 4 fire fighters.

Campaigning over 10 years Windsor Liberal Democrats' "Save Windsor Fire Station campaigners" stalled plans to close Windsor Fire Sation and brought the issue to the top of the agenda locally.

Our volunteers have devoted thousands of hours to the campaign delivering literature and forcing the truth out of the fire service and council one Freedom of Information request after another.

Our campaigning has forced the Conservatives to build the new interim fire station and to keep a proper Fire Engine (instead of the mini Fire Engine they planned).

Currently residents in the Royal Borough pay about 20% of the Fire Brigade's Council Tax income, but only 13% of the servise is based here.

As part of our campaign to restore proper fire services to Windsor, we have launched our new "Six-On-Board" campaign for a full size crew to be restored to the Fire Engine. 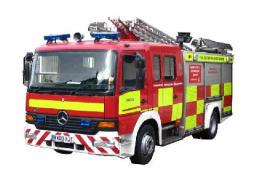